Why do I need to learn Math? 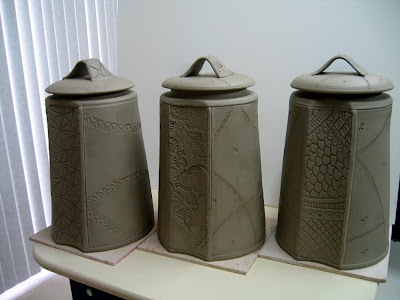 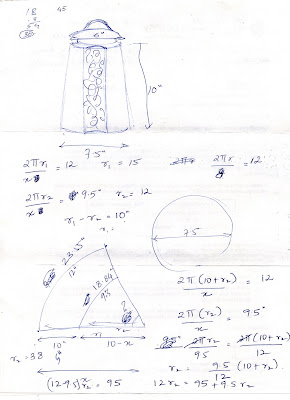 Parents can admit that they have been questioned several times by their kids, “Why do I need to learn Math, Geometry, Algebra….?” And the list goes on.
I for one loved doing Math as a kid. For me it was a good pass time. Yes, you heard right, good pass time. When I was asked to study by my parents and I used to always pick Math. My parents had to push me to study other things. As I grew Math and Physics became my favorite subjects.
Of course this did help me in acquiring my current job as a software engineer. So you are wondering why I am even mentioning this in my art related blog.
The fact is that I see myself applying my knowledge of Math in my art work very often. A good example are these big jars I made recently. Of course, one option was to throw them on the wheel, but I wanted to make them big and much lighter and consistent in size. So I decided to make them from slabs of clay, a technique I got more confidence after seeing the work of Ginger Steele.
For the walls, I could make straight cylindrical in shape, which would involve cutting a rectangle and joining the ends. But what if you want it slightly tapered? I would have to have a curved slab, but how big? What curve? What radius? What angle? That is when geometry and Math help. I spent several hours designing the shape that I wanted and then trying to figure out the template for the slab I would need to achieve the shape I wanted. Here is a small snippet of my scratch pad. Oh yes.. it sure has some Math there.
Once I figured out the size of my template, it was a lot easier to construct these jars. Once I knew I had the template right, I didn’t have to struggle with the shape that I wanted. The top lid seats and lids have been thrown on the wheel. I still need to go through the process of decorating them, but at this stage I am happy with the way they turned out. I will post more pictures when I am done with these.
So tell your kids to stick to Math, even if they don’t know where they will need it. It will surely benefit them in some way or the other.
Posted by Charan Sachar at 7:40 AM 5 comments: 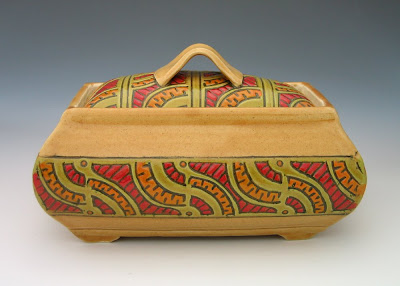 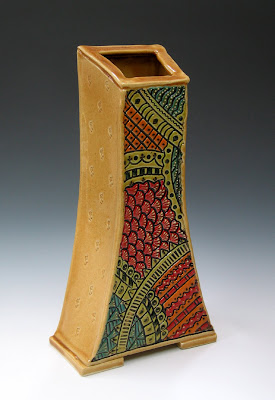 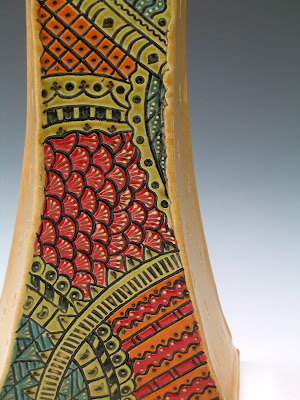 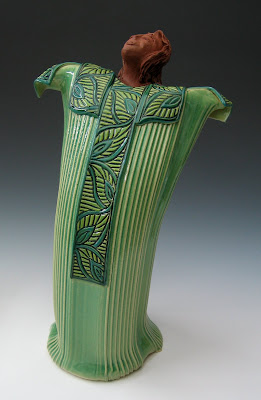 So once I made the decision of buying the pugmill, I felt free to experiment. I wanted to try some new things I hadn't tried before. I have been updating some of these pictures on facebook, but here is a glimpse into some new work. Having the pugmill is really liberating!
This new line of work is a lot more decrorative and time consuming. I am still trying to figure out pricing work like this before I post it on Etsy.
Posted by Charan Sachar at 11:36 AM 3 comments: 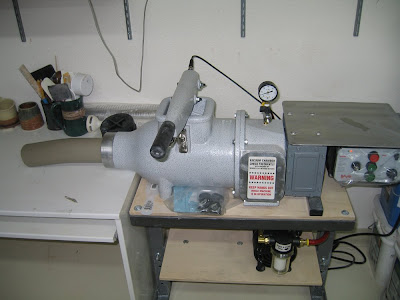 So I finally bit the bullet. After a year or more of going back and forth thinking whether I should buy a pugmill, I finally did. I got the Peter Pugger VPM-9.. which is their small model having a capacity of 25 pounds of clay. This should be plenty for my usage.
For the last year or so, I have been debating with myself. I am not a full time potter, so do I really need a pugmill? If you want to know what was going on my head read on... You will see how I tackle and convince myself along the way. I guess if you have your mind set on something, you will convince yourself one way or another. This could be boring for some so just skip it and watch the video of the pugmill in action. It is noisy only when the vacuum is on, otherwise very quite.
The question of size came in because I don't have a lot of room to put a large size pugmill. The VPM-9 seemed like a decent size, 3 feet in length. Earlier I thought I would keep it in my garage rather than my studio. But I figured (with the help of my wife, Reema) that if I were going to use it often to condition, recycle and wedge clay, it would make more sense to have it close by in the studio. My large quantity glaze chemicals had to move to the garage instead. I am not glaze testing much and I am now set of using only on certain glazes, so the need to access the large chemicals is less. Problem solved!
The big question of price came in. Since I am not doing pottery full time, my consumption of clay is probably 1/2 - 3/4 ton a year and it is increasing. I had realized it would be quite a while till recycling clay and saving clay money would make the pugmill pay for itself. Clay is pretty cheap. But then there is the guilt of throwing it away. Because of trying to use of up clay, my slip decoration technique came about. Some of my slab pieces are also the result of just trying to use scrap clay. I still wasted a bunch and not to forget the time I spend in reclaim. On the other hand, having the pugmill would definetly be easier on my hands, neck, wrists and shoulders. I wouldn't be wasting much clay. It would be environmentally right to reuse than to dump. I also think I would be more productive, rather than spending time wedging and weighing clay. With the 3 inch pug I get from the pugmill, 2inches of length is exactly the weight I use for my mugs. :)
OK.. I am convinced... bring it on!
One of the main reasons I wanted to get one was to give me freedom to experiment and not worry about clay getting wasted. I use the extruder a lot and handbuild too. I feel a lot of clay gets wasted in that process, rather than throwing on the wheel. Last year, I purchased the expansion box for my extruder, and I had not been able to try new dies for it. Out of a 25 pound bag of clay, I got one 18 inch sculpture form and the expansion box has 10 pounds in it that I cannot extrude out. Once that clay is removed from the expansion box, it is very hard to reclaim it. It takes three times as long to reclaim that 10 pounds than to extrude. I stopped using the expansion box. But with the pugmill there is no guilt of wasting clay or spending time in reclaiming clay.
I bet this opens the door a lot of new work. I am really excited to see the direction my work takes.
More importantly I would like to thank several potters and friends who have answered all my bugging questions regarding pugmills and the VPM-9 in particular
Ginger Steele
Belinda
Anne Doyle
Meredith Kopp
Lori
Kristen Swanson
Bernie Short
Folks at Clay Art Center
Folks at Peter Pugger
and I am sure I am missing some, so Thank you all!!!
Posted by Charan Sachar at 8:43 AM 7 comments: 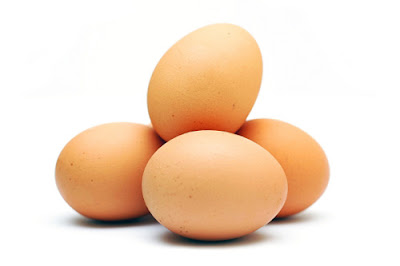 Come one! Come ALL!!! Join the Etsy Etsy Mud Team in a totally EGGciting and EGGcentric EASTER EGG HUNT!! The Prize is a 15% off coupon to be used in select Mud Team shops!! WOW!! What an EGGstra special way to start your Mother’s Day shopping! All you have to do is read the rules below, grab up your virtual Easter Egg Basket and then start your hunt in this fun filled Pottery EGGSTRAVAGANZA! :)
Official Egg Hunt Rules:
1. You must be prepared to have FUN!
2. The Egg Hunt runs from 8am, Wednesday, April 8th through Midnight Easter Sunday, April 12th.
3. The goal is to find 5 (five) Etsy Mud Team shops that have hidden EGGS in the photos with their pottery. Not all of the Mud Team Shops are participating in this Event, so that's where the hunting comes in. If the shop is part of the Hunt, the eggs will be in the main photos that you see when you are looking on the first page of their listings.
4. To find the listings, go to http://www.etsy.com/ and you need set the Search button to "Handmade Items: Tags,Titles" and then type in etsymudteam. This is the start of your hunt. You will have to click on the pictures from individual shops, go into their Shop Home and look for photos with EGGS!!
5. You found one?!?!? EGGcellent!! Put it in your virtual basket by writing down the NAME of the SHOP where you found it and then move on to other shops until you have gathered 5 Shop names with eggs in your basket.
6. WOW! Your basket is overflowing with Muddy Eggs!! EGGciting, isn't it? Now you contact LOVEARTWORKS.etsy.com , she is the egghead responsible for collecting and keeping all of this EGGStroadanary information so you type in your list of Shops with eggs and hit send!! Her shop does not count as an official "egg", but you can go look in there if you are at all confused, because she's a good egg and has hidden eggs for you to find as an example.
7. Now what do you do? You sit back, relax, perhaps have some green eggs with ham and wait until Monday, April 13th. If you were correct in your EGGventures then you will receive a coupon for 15% off participating Mud Team Shops, a list of the shops and all pertinent information on using the coupon!
8. GO!! Gather up your basket and have an EGGCELLENT time... Happy Hunting!!!and HAPPY EASTER from all of us at the ETSY MUD TEAM!!
Posted by Charan Sachar at 6:53 AM No comments: 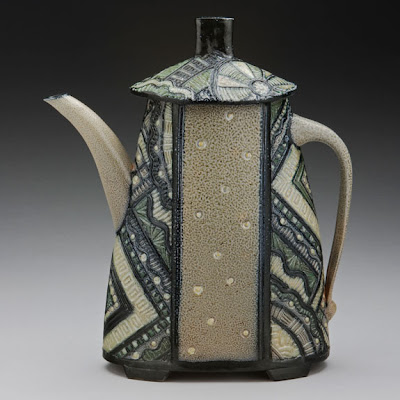 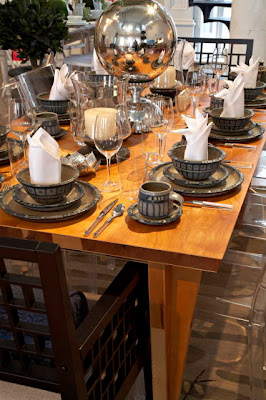 I can't even begin to describe how generous potters are in sharing ideas, techniques, glaze recipes etc... Since making pottery is so entirely handmade, every artist will have something different in their piece even if they are making similar items.

I have met several potters online and in workshop and all have added so much to my skill set but Ginger Steele truely takes the cake. I have always been struggling with lids. I managed somewhat but was never entirely happy. I spent last weekend at Ginger's studio learning how to make thrown lids for small/big jars, teapots, casseroles. It was all hands on and I gained so much. We also exchanged some patterns and stamps and I am very excited to see how we incorporate it in our work. We made casseroles, jars, pitchers, bowls... etc.. Attached is a picture of some of the work I did and later carved. I did it in her clay so I can get then fired in her kiln. I really like the way the lidded pieces turned out and I have never had such good fitting lids.

One key thing I realized was that I was working with very soft clay, which wasn't letting me manipulate the clay enough for lids seats. The most important thing was to make the lid seat before pulling up the wall. It might be second nature to everyone, but I had not realized this.
One big take away was that I really need to let go and experiment more... not worry about wasted clay, or waste my time thinking about how to use my scraps of clay etc.. etc.. So I am very convinced to purchase a pugmill and I will getting one very soon. I think it will change the way I work, evolving my work in different ways.
I am looking forward to working with her again on her handbuilt work.
Posted by Charan Sachar at 9:57 AM 8 comments: