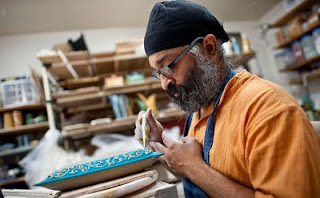 I am very excited to share that I have been featured on the Front Page of The New York Times (SundayStyles Section) today (August 14th 2011). Grab your copy today!

Here is a clipping from the article with some great pictures taken by Stuart Isett
"Charan Sachar, 37, a former software engineer who lives near Seattle, used to spend his downtime perusing Etsy, the D.I.Y. crafts site. He daydreamed of an unfettered life at his kiln, creating Bollywood-inspired teapots and butter dishes.

In January, after 12 years in software, he quit to devote himself full time to his online store, Creative With Clay, which sells stoneware he designs and makes. (Last May, he told his story on Etsy’s “Quit Your Day Job” blog.)

Now, instead of spending his free time absorbed in visions of clay, he spends as much as 70 percent of his day on administration. He is not only his own boss, he is his own accountant, sales director, marketing manager and shipping clerk." 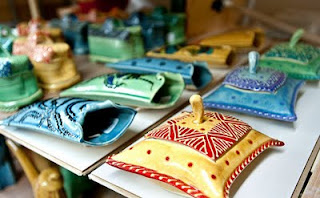 I have listed several new items in my Etsy shop. Thank you all for your support through out these years. I wouldn't have been able to do it without you. 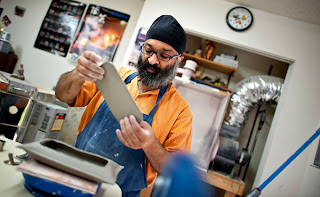 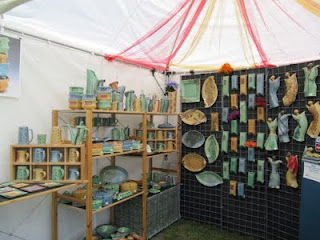 Almost every year, I make changes to my booth. This time the change is big and it costed big too $$$. After a lot thinking, the Caravan Canopy was just not working for me. It has been very strong and stable for the shows I have done over the last few years. The thing that annoyed me most about it was the cross bars at the top. They blocked the view of platters and dancing Divas which were hung on my back wall. Very distracting. So after a lot of research, I purchased the Light Dome Canopy. I like the open high ceiling and bright light in the booth. This gave me the oppurtunity to add some color to the top as well. 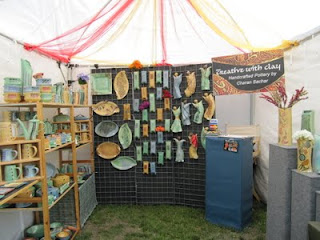 They are a little time consuming to setup, but I bet it gets better with time. The most annoying this has to be putting the top on. With two people it is a breeze but with a short guy like me, it is a challenge.

Would love to hear about the canopies and setups other artists have. Feel free to tweet and leave your comments.